Effects of Pregnancy on Your Oral Health

Pregnancy can have various effects on a woman’s Oral Health status. Most pregnant women may notice some changes in their gums during pregnancy, including redness and bleeding gums when brushing. Additionally, some women may experience severe bleeding and bloating. These changes are called gestational gingivitis which usually starts in the second month of pregnancy. Gestational gingivitis peaks around eight months and may subside after giving birth.

This condition usually occurs in the front of the mouth. Symptoms of pregnancy gingivitis are similar to normal gingivitis but can have different causes. Progesterone levels in the body can increase by up to ten percent of normal levels during pregnancy, which can promote the growth of certain bacteria that result in gingivitis. Additionally, during pregnancy, the immune system works differently, which can alter the body’s response to bacteria. 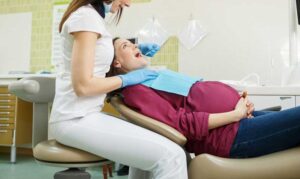 To be able to minimize the effects of pregnancy gingivitis, it is best to maintain good oral hygiene. It is recommended to brush your teeth for two minutes at least twice a day. Make sure to floss daily. Antimicrobial mouthwash is recommended to prevent gum infection. Some doctors suggest that mouthwashes that do not contain alcohol are better, although there is no evidence that alcohol-based mouthwashes can adversely affect pregnancy.

During Pregnancy Oral Health Melbourne CBD, it is important to have your oral health checked by your dentist, especially the condition of your gums. Pregnancy gingivitis can be treated using professional cleanings, which can be done at any time during your pregnancy, especially in the second trimester. However, advanced and invasive treatment, including periodontal surgery, is not recommended until after delivery.

Another effect of pregnancy in oral health is pregnancy granuloma or pyogenic granuloma, also known as pregnancy tumor. Two to ten percent of pregnant women may suffer from this condition, which is an enlargement of the gums. Although it is also called pregnancy tumor, it is not cancer and is dangerous. Gestational granuloma usually develops in the second trimester or pregnancy where there are red nodules that are usually seen in the upper gum line. However, red nodules can be found anywhere in the mouth. These lumps can bleed easily, forming scabs or ulcers.

The causes of gestational granuloma are still unknown but poor oral hygiene is usually a major factor. Blood vessel malformations, trauma, viruses and hormones can also be factors in the condition.

Tooth loss due to severe morning sickness or frequent vomiting is also a common condition for pregnant women, which can affect the enamel of the front teeth. If you are experiencing frequent vomiting then it is important to consult your dentist to know about various medications to prevent tooth erosion. Dry mouth is also an effect of pregnancy. You can prevent dry mouth by drinking water and eating sugar-free hard candy or sugar-free gum to help stimulate saliva.

On the other hand, excessive saliva can also be an effect or pregnancy, although it is less common, which occurs in the early stages of pregnancy. Excessive salivation may be associated with nausea. Women who are planning to become pregnant should visit a dentist for an oral examination and treatment. Gums and teeth need special attention during pregnancy, so proper nutrition and regular brushing are essential.

Choosing the right pregnancy dentist for you, with sufficient experience in complex matters, extensive practical training, and a gentle approach that meets your needs and desires, is the key to achieving the most successful outcome – your gorgeous new smile.

Eradicate Your Oral Health Problem Via Getting Best Dental Treatment